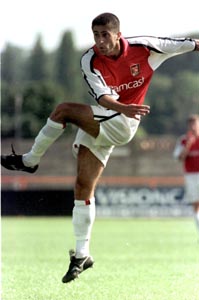 Silvinho was the first Brazilian to Join us, and he did so without the attendant hassle that accompanied Edu's farcical transfer - as caused by his Portuguese passport problems. Sylvio Mendes Campos Junior 's Portuguese passport was never in doubt and had been good enough for him to trip around Europe with our team for a couple of seasons. Or so it seemed at the end of 2000-2001 season.

Before signing for Arsenal in June 1999 the then twenty-five-year-olds career had included a 1998 Brazilian League Championship in and 1995 National Cup win with his former club Corinthians. At that time he was maybe third or fourth choice behind Real Madrid's Roberto Carlos for the national team's left back berth but although he'd made it as far as the substitutes bench Silvinho remained uncapped. The very idea that Arsenal were now signing a Brazilian was an exciting development, ok so we'd never heard of him but then most of us hadn't heard of Vieira before he arrived.

All our new Brazilian had to do on arrival was learn the language, acclimatise to Premiership football and replace a living legend, namely Nigel Winterburn. Like most Brazilians he was used to playing a couple of games a week so his major adjustment would be one of footballing styles. His first game in England found him playing in the same team as Nigel in the Charity Shield match where we beat United 2-1 at Wembley. Interestingly enough the 1999-2000 Handbook lists Silvinho as a defender / midfielder on page 20 while on page 52 a certain Ashley Cole is listed as a 'Young Professional' forward.

The 1999-0 season saw Silvinho make his league debut away to Sunderland; thereafter he and Nigel shared the left back slot while there was also an occasional outing in midfield for the new boy. We had to wait until May for his first goal, which came in a 3-3 draw at home to Sheffield Wednesday. May was a good month for Silvinho because he also won his first Brazilian cap playing against Wales in the Millennium Stadium. By the end of the season he was Arsene's preferred choice and as a result Nige moved on to the 'Appy 'Ammers. Winterburn was always superior as a defender, but Silvinho was the best attacked left back we'd seen at Highbury since Kenny Samson and in Wenger's world going forward is a major part of the game plan. The fans took to Silvinho in the same way they did to Kenny.

Silvinho was and still is a very popular player with Arsenal fans. A religious man who had always been good enough to stop and sign all the autograph books thrust under his nose. A small thing perhaps, but it's something it seems that many of Arsenal's English contingent have forgotten how to do. Maybe his upbringing made him relate better to those on the outside looking in. With his favourite music listed as Gospel and a claim that the bible would be one of three items he'd take with him to a desert island it's easy to see that he is a seriously religious man.

I enjoyed his twinkling feet, his broad flashing smile and his appetite for going forward. Some stunning goals also spring to mind. One was the at Chelsea which earned us a 2-2 draw when Lebeouf's weak clearance found none other than out number 16 who took no touch but just walloped it straight into the top corner with his trusty left peg. This was back in September 2000 when he and Cole managed to score 4 goals in as many games from the left back slot. Silvinho missed the Bradford match, in which Cole scored on his debut, but scored his third in three games when he grabbed the only goal in our match away to Sparta Prague. There didn't seem to be much on when he picked up a Pires pass just outside the box. But Silvinho flicked the ball through his legs, smoothly manoeuvred it on to his favourite left foot and after weaving past two defenders he neatly lifted the ball over the advancing keeper and it crept home via the far post. Magic. As was another goal on the European trail, which saw him score after a great run in Moscow against Spartak.

Silvinho celebrating his goal against Chelsea

Injuries were to hamper his season though and a young man called Ashley Cole took up the challenge with relish. Never had we had two such wonderful attacking left-backs on the books at the same time. Cole got the England call but few would seriously claim that either of them had a cast iron claim to the left back slot. The following season's competition for the left-back berth looked like it could only benefit the team, but it wasn't to be.

During the summer rumours circulated that Arsenal would unload a couple of internationals to balance the books after our summer spending spree, and that our Brazilian fullback might be one of them. Speculation had it that Silvinho might go for a small fortune to Inter Milan, Deportivo La Coruna or Barcelona. Then it seemed that he might return to Corinthians, then in July David Dean admitted that he was in the early stages of a transfer deal. Silvinho was suddenly an outcast and this was confirmed when the Club's official website showed that Gio Van Bronckhorst had been given the number 16 shirt and Silvinho was without a squad number.

Silvinho was settled, enjoying his football and totally at home in England and the Premier League, or at least we thought so. Now there he was - gone. There was no thank you, good bye and good luck from the Club. More of a hushed - oh by the way he's gone for an undisclosed fee to Celta Vigo and we're not saying a word. Rumour suggested Wenger had told him that Cole was now his first choice player. Fact had it that he was going to play for the Spanish side under a Brazilian passport. Strange, very strange.

If the press are to be believed, at some point in the 2000-1 season a newspaper decided to dig deeper than most and it seems they checked every possible outlet where a genuine passport could have been issued. According to the journalist not one such office could claim to have issued one in the name of Sylvio Mendes Campos Junior. I have no doubt that Arsenal being the sort of Club they are had obviously done all within their powers to ensure that he was the genuine article both as a footballer and as a Portuguese national. In these days though where money can buy you anything you want a false passport seems to be no problem.

We might never get to hear the real story but we did get to see a fabulous player, and a very pleasant man who played the game with a smile on his face, or when he'd scored with a fabulous great big toothy grin. So thanks Silv you were a class act and I for one enjoyed watching you immensely.

Position Left back (or left midfield)

Brazilian Internationals 7 at the time of leaving

Sold to Celta Vigo (Spain) for an undisclosed fee