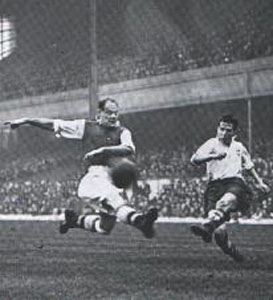 George Male defends against Preston in 1937

George Male : A classic full back

In a list of the most loyal servants Arsenal Football Club have ever had the privilege of calling their own, the likes of Tom Whittaker, George Armstrong and Pat Rice would be immediate candidates for top spot. However, arguably the man who put the most effort, the most passion and the most elbow grease into the club was George Male. Born on May 8 1910, George Male first got the taste for professional football playing for West Ham schoolboys, and then with the amateur side Clapton, from whom Herbert Chapman signed him on his 20th birthday.

Male's Arsenal debut was far more successful than that of most of his colleagues in the legendary Gunners team of the 1930's, who more often than not seemed to experience defeat on their first appearance. December 27th 1930 saw the visit of Blackpool to Highbury, Arsenal's third opponents in as many days. There was no sign of fatigue in the players, however - Male was introduced to the talents of Jimmy Brain and David Jack that day, and then some, as each scored a hat trick in a superb 7-1 triumph.

Male played two more games in the 1930-31 season, therefore playing his part in the Gunners' first ever league title. He made nine league appearances in the following campaign, and also replaced the injured Alex James in the defeated Cup Final side of 1932. However, it was during the first half of the 1932-33 season that the decision that would change the course of Male's career was taken. Not by Male himself of course - by Herbert Chapman.

Male's Cup Final appearance had been in his usual left half position, where he had spent his whole career to date. However, during the close season the manager found himself with a problem. Veteran defender Tom Parker had decided the time was nearing for him to hang up his boots, and Chapman needed a replacement. Rather than look elsewhere, Chapman simply decided that the all-round skill and versatility of George Male (unlike a great many players, he could strike the ball cleanly with both feet) would make him the perfect replacement.

The twenty-two year old Male was summoned to the boss' office, and much to his own amazement, was told he had become a right back. Not just any right back of course, but according to Male himself, Chapman was so certain of his skills that: 'I wasn't only convinced I was right back, I knew I was the best right back in the country!'

So, on October 15th 1932 away to Blackburn Rovers, George Male played the first of 271 appearances at right back for Arsenal. Such was the success that within five months he'd had trials for England in his new position. It would be an affront to the other exceptional talents in the Arsenal side to say that Male's introduction boosted the team so much that they went on to win the next three league titles. However, there is no escaping the feeling that Male's switch to the right and his full introduction into the first eleven seemed to provide the final piece of the puzzle.

Along with that other wonderful talent at left back, Eddie Hapgood, Male went on to provide the perfect shield on the flank for a succession of Arsenal goalkeepers until the outbreak of war in 1939. In total, Male played a part in five Championship triumphs, as well as the FA Cup victory of 1936.

Furthermore, his international career flourished. He and Hapgood provided almost certainly the finest pair of wide defenders from the same club England has had to this day. They played together 14 times, and it was a mark of the two men's considerable talents that when Eddie Hapgood relinquished the England captaincy, it was George Male that took the armband from him.

The second world war brought about the end of so may players' careers, as many were injured, killed, or simply too old to play upon the resumption of the full league program in 1946. But not George Male - while many of the names on the team sheet to face Wolves on August 31st had changed, his remained, and he went on to play 15 times during the course of the season. This having served his country in a non-footballing capacity, as a physical training instructor in Palestine during the war.

However, his playing career was drawing to a close. The 1947-48 season was to be his last, and on May 1st 1948, George Male played his final game in Arsenal's first team. And what a memorable game it was - the 8-0 demolition of Grimsby Town was a fitting way to end the club's first postwar championship-winning season, and the best possible way for Male to end his career.

But only his playing days ended in 1948, as Male took up a position on the coaching staff. The quiet, retiring man on the field became a hard, determined but utterly fair man on the training pitch, and who better to assist manager Tom Whittaker to one more league title and two Cup Finals (including the 1950 win over Liverpool) in the next five years. 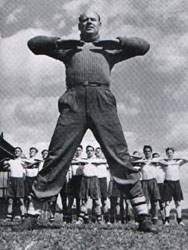 As age crept up on George Male, so he limited the physical aspect of his job more and more. But retirement did not cross his mind, as he took up a scouting role more suited to a man of his advancing years. Forever the able servant, Male can also be thanked for Arsenal's first double in 1971, for it was he that unearthed the mercurial talents of Charlie George.

Eventually, at the age of 65 the time came for George Male to finally take retirement, and enjoy the rest of his days as a simply supporter of the club. Eleven years later, Male took centre stage for the club's centenary celebrations as one of the few survivors of the legendary 1930s side, and was rightfully hailed as one of the greatest players in the history of the club, certainly its best ever right back, and arguably one of the finest right backs of all time.

On February 19 1998, George Male passed away. The final link of the Arsenal of the 1930s, and the last remaining player to have turned out under Herbert Chapman, had gone. George Male will forever be remembered as a kind, honest man, who served his club and his country with a dedication rarely seen today. He gave 45 years of his life to Arsenal, helping to provide the club with success after success both during and after his playing career, and can without question lay claim to the number 2 shirt in the all-time Arsenal XI.

Arsenal Who's Who - Jeff Harris

Position Right back (previously left half)

Only scored in Friendlies, tour matches and wartime football

On retiring from playing he coached reserves and youth players and also worked in administration as well as a scout for the club.