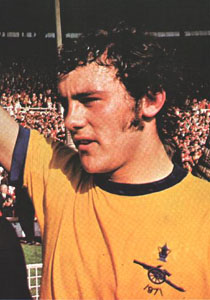 Ray Kennedy was not the greatest player ever to wear the red and white but certainly for all the Gooners who were priviledged enough to see him he remains an unforgettable hero. When he was just 15 years old and undergoing his apprenticeship with Port Vale, the manager, none other than the great Sir Stanley Matthews, had told Kennedy that he was not good enough for professional football. Imagine being told that you were not good enough by one of the greatest English players ever, it must have been devastating. Kennedy certainly felt heart broken and went back to his native North East. There he worked in a candy factory and played football for a local team. Fortunately he was discovered by an Arsenal talent scout and signed for the Gunners as an apprentice in April 1968. This was certainly a great leap forward from a team like Port Vale.

In 1969/70 he graduated from the reserves to the first team. He made his League debut in October against Ipswich. On the 22nd April 1970 Ray played in his fourth match, the first leg of the Fairs Cup Final. It was his first European match and Bertie Mee sent on the young 18 year old late in the game played in Brussels. At that time the Gunners were in trouble being 3-0 down against the Belgian giants Anderlecht. While roaming around in the penalty area he met a cross and headed it in the Anderlecht goal, 3-1. This gave Arsenal hope for the second leg at Highbury in 28 April 1970, which the Gunners won 3-0 (4-3 on aggregate). Arsenal had won their first trophy in seventeen long seasons it was also their first in Europe. Ray Kennedy had received a Fairs Cup Winners Medal in his first season of Football and some would argue that his goal in Brussels was the turning point for the modern Arsenal.

The following season was the big one, the double year, in which Ray had played a significant part. He played 41 league games in which he scored 19 goals. Ray also played in all 9 F A Cup ties, all 5 League Cup games and all 8 of Arsenal European Fairs Cup campaign. His goal tally for the season was 36 making him top scorer ahead of John Radford with 31. Not bad for some one who was told he wasn't good enough. Kennedy earned his big break in the 1970/71 season when Charlie George broke his ankle in the opening game at Goodison.

Ray was a big strong man and had a terrific first touch which enabled him to hold the ball up. His close control was superb and he had an uncanny way of shielding the ball and laying it off to bring others into play. He was tremendously difficult to knock off the ball and was able to ride some really tough tackling. Despite being continually battered he played 63 games on the trot missing only the first game of the season, not bad for a nineteen year old. Both Kennedy and Radford were powerful headers of the ball and their partnership flourished with the aid of superb crosses from Arsenal's highly accurate winger George Armstrong. Add the aerial ability of George Graham and it's easy to see why this team caused a serious threat from every corner. Ray's powerful left foot was pretty special as well, his low driven shots with minimal backlift were a delight to behold.

He soon became a crowd favourite in the North Bank. His status was elevated to living legend on the 3rd May 1971 when Arsenal played the Old Enemy, Tottenham in a crucial game for three clubs. If Arsenal won or had a goalless draw the title would go to Highbury for the first time since 1948, if they lost or had a scoring draw the title would go to Leeds United at Elland Road. The stakes were high for Spurs as well; a win for them would give them a place in Europe. In front of a 51,000 crowd at White Hart Lane, Kennedy met a cross from the industrious Geordie Armstrong and headed it in past Pat Jennings and the title came to Highbury for the first time in twenty-three seasons. 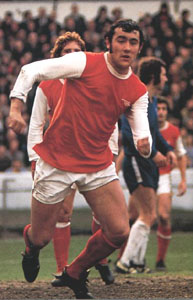 Ray Kennedy with Alan Ball, the noxious Osgood and Arsenal captain Frank McLintock in the background

The job was only half done because 5 days later Arsenal had the FA Cup Final against Liverpool at Wembley. They had the chance to do the league and cup double. This was achieved in extra time when George drove a hard ball past Ray Clemence, the game finished 2-1 to Arsenal. Ray Kennedy by now had won the Fairs Cup medal, League Championship medal and the FA Cup Winners medal. After his first full season he had already won more medals than the great Sir Stanley Matthews won in his long football career. This earned him a place in the England Under 23's for whom he played six times . The following season he made 37 league appearances and played in Arsenal's first European Cup campaign. The European dream was shattered by a George Graham own goal at Highbury against Ajax in the Quarter Finals. That season he was once again the Club's top scorer with 26 goals in all competitions. The Gunners came 5th in the League campaign and made a Wembley return against Leeds in the FA Cup Final. In this game Kennedy was demoted to the bench and came on for John Radford. But it wasn't enough as the Gunners lost 1-0. In the 1972/73 season Kennedy made 43 appearances and scored 11 goals. Arsenal came 2nd behind Liverpool by 3 pts. They went out of the FA Cup losing 2-1 against Sunderland in the Semi Finals at Hillsbourgh. The following season Kennedy made 46 appearances and scored 13 goals. At the end of the 73/74 season the Arsenal supporters were shocked when Arsenal sold Kennedy to Liverpool for £180,000 a further shock came when Bill Shankly announced his retirement making Ray Kennedy his last signing.

Many players from the double team had struggled after their exit from Highbury, but not Kennedy. At first he struggled to make it in the first team being a natural attacker. He had Keegan and Toshack to contend with. But Paisley the Liverpool manager had something special in mind, moving him to an attacking left side midfield role. This meant that he did not have to contend with the old firm of Keegan and Toshack up front, but was still able to made his attacking presence felt. He won the league championship with Liverpool in 1975/76. His new role also helped him win his first cap for England. The following season he just missed out on being the first player to win the league and cup double twice by just a whisker when he hit the bar in the Final against Manchester United at Wembley which United won 2-1. Ray once again won the league title with Liverpool in 1976/77 who then made up for the FA Cup Final defeat by beating Borrusia Moenchengladbach in Rome 2-1. Kennedy went on to win the League with Liverpool 3 more times in 1978/79, 1979/80 and 1981/82. In 1975/76 Ray won a UEFA Cup winners medal, scoring in the home leg of Liverpool's 4-3 aggreate victory over Bruges. Two more European Cup wins followed in 1978 against Bruges at Wembley and in1981against Real Madrid in Paris. His League Cup winners medal, won over two legs against West Ham, was small beer by comparison.

Kennedy won 17 caps for England and in his last game for England in 1980 in the European Championship against Italy in Italy; he nearly helped England advance to the Quarter Finals but this time he was denied by the bar. He was proud to play for England but did not enjoy it as much as club football because he believed the players did not play as a unit but played for themselves.

Ray was sold to Swansea in 1982/83 who were then managed by the man he was supposed to replace in Liverpool, John Toshack. Kennedy had a terrible time at Swansea as Parkinson's disease set in. He was accused by Toshack of not trying and was called a cheat but unfortunately Ray was helpless as Parkinson's disease caused him to struggle to even play football. He was transferred to Hartlepool and retired in 1984. Later he became an assistant for Sunderland at Roker Park and was diagnosed with Parkinson's disease when he was only 35. His testimonial was played in April 1991 at Highbury between the two teams he had been successful with and the two clubs fighting for the old division one, Arsenal and Liverpool. Although only a friendly a good crowd of 20,000 turned up. Liverpool won the game 3-1. All the profits went to the research of Parkinson's disease.

Ray Kennedy, despite being told by Port Vale tha the was not good enough at the age of 15, went on to become one of the most decorated players ever in English football. 6 league titles, 1 FA Cup, 3 European Cups, 1 Fairs Cup, 1 UEFA Cup and 1 League cup - a total of 13 winners medals, far more than Stanley Matthews. To top it off he won 17 Caps for England. He was a man who gave 101% to football but illness cut his career short tragically. A crowd favourite in both the North Bank and the Kop, he will go down in history as one of the greats achieving almost everything possible in club football. Having been told he wasn't good enough, he replied to Sir Stanley Matthews in the most perfect way possible.

Transfered to Liverpool July 1974 for £180,000 other clubs Swansea and Hartlepool